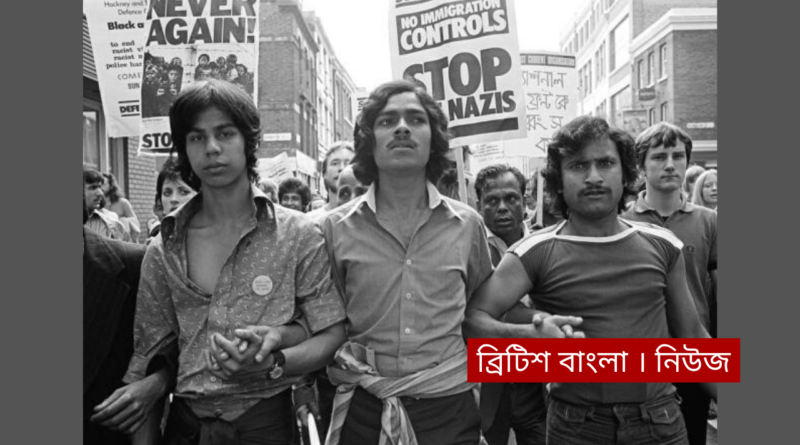 Ansar Ahmed Ullah : The racist killing of a young Bengali man in 1978 was the George Floyd moment for Britain’s Bengali community.  Sparking mass protests against far-right intimidation and institutional police racism, it led to a turning point in race relations.  Photographer Paul Trevor captured the dramatic summer of that year.

The 4th May marks Altab Ali Day, held each year to commemorate the racist murder of Altab Ali, a 25-year-old Bengali leather garments worker, in East London.  It recalls the transformative year of 1978, when the local Bengali community mobilised in an unprecedented, anti-racist uprising. Their actions represented a turning point in local and national resistance against racial harassment and discrimination.

Today a local project is documenting the memories of people involved in these momentous events, inspired by Paul Trevor’s extensive collection of photographs.  The search is on to identify people in the photographs, and to record their memories.  The ‘Brick Lane 1978’ heritage project will create a first-hand record of peoples’ memories and make Paul Trevor’s significant photographs publicly accessible. It culminates in an exhibition and public talks at Four Corners Gallery in 2021.

Paul Trevor said, “They say a photo is worth a thousand words. But sometimes, as in this case, words are essential. This project is an opportunity to add the voices of those who made history to the images of that story.”

Carla Mitchell, Artistic Development Director at Four Corners said, “This history is hugely relevant today, with an increase of racist attacks and police violence making the headlines.  Thanks to National Lottery players we will be able to ensure that this powerful heritage is made publicly accessible for a wide audience of current & future generations.”

Stuart Hobley, Area Director, London & South at The National Lottery Heritage Fund said, “The history of community activism and anti-racism of Brick Lane 1978 has played a significant role in shaping the culture and heritage of London. We’re delighted that, we can support Four Corners to explore and record this crucial part of the local community’s heritage, acknowledging its impact on the city and promoting better understanding in the wider community.”

‘Brick Lane 1978: The Turning Point’ project is supported by the National Lottery Heritage Fund. It is a collaboration between Four Corners and Swadhinata Trust, in partnership with Paul Trevor.  With the help of volunteers and original activists, the project is creating a record of this watershed moment as told by local people which will include an archive of photographs and oral histories, a short documentary film, a touring exhibition, a free public events programme and a study pack for schools.

Altab Ali’s murder on the night of the May 1978 local elections in which 41 National Front candidates stood marked a turning point for the Bengali community.  10,000 people marched behind his coffin to Downing Street to demand police protection.  Photographer Paul Trevor documented the moment when second generation, East London Bengalis mobilised against racist attacks and institutional police racism.  Trevor was a member of the radical Half Moon Photography Workshop (HMPW) collective, who focused on socially committed documentary. His images, covered in the HMPWs Camerawork magazine, showed how Bengalis endured racial abuse as a constant factor of everyday life.  By the end of 1978, the National Front was forced to leave its headquarters near Brick Lane.  But far-right racist attacks in East London persisted into the 1990s.  To this day the name Altab Ali remains linked with the struggle against racism and for human rights in London’s East End.