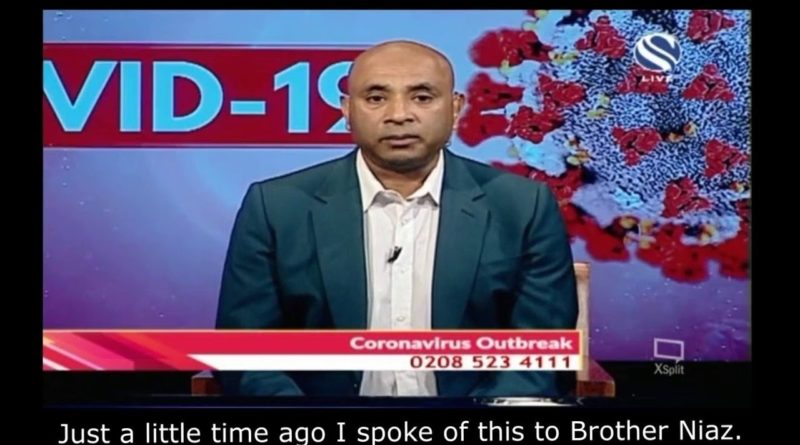 The programme titled Covid 19 which Mahee Jalil was presenting live on channel S on 3rd May. At one point of the programme while discussing the price hike of paan he said in Bengali that the Muslims who came to this country from Bangladesh have inherited the blood of low caste Hindus, as a result this is causing all the problems in the Bengali community. Muslim shopkeepers cheat their customers because they have inherited the blood of Hinduism.

The compliant letter signed by SBMUK’s President Pushpita Gupta states, ‘This obnoxious racial attack in a public TV programme has absolutely shocked thousands of Bangladeshis and Bengali speaking people in the world.’

His outburst has offended a lot of people in the community. Tower Hamlets Mayor in a statement said, ‘I have become aware of a tv broadcast in which a disgraceful and derogatory statement was made about Hindu people. It was a disgusting statement and shameful. An attack on any faith community is an attack on all of us and must be condemned. It is only by standing up against such behaviour that we can go forwards as a decent and respectful community.’ Bethnal Green & Bow MP Rushanara Ali said, ‘I am deeply shocked by the hateful and reprehensible remarks made by Mr Jalil. He should apologise immediately, and retract the offensive, racist comments he made.’