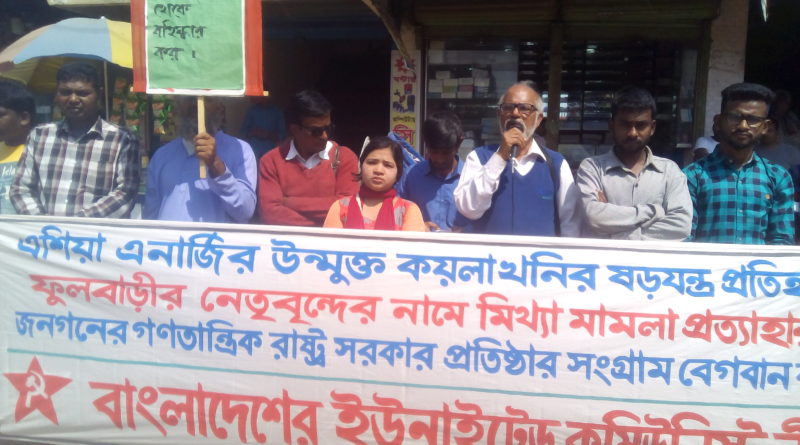 Due to sudden AGM postponement, angry transnational protesters in London joined the occupation of Imperial College London for Democratisation, Decarbonisation and Decolonisation.

Bangladesh Deputy Energy Minister confirmed that GCM has no valid license or asset in the country and claims that the government will be taking legal action against them.

GCM Resources on Monday issued statement postponing Tuesday’s AGM indefinitely again, citing “security concerns” of the venue. This is the second time that the London-listed company have cancelled their AGM in three months, citing security concerns. Last December’s meeting was cancelled 36 hours before it was due to take place, also citing security concerns. In Phulbari and London, communities are angry because of GCM’s decision to postpone the AGM, which they say, is becoming an institutional habit. GCM’s last minute cancellations indicate that it has scant regard for its investors.

Dr Rumana Hashem, the Chair of Phulbari Solidarity Coalition and an organiser of the London protest said, ‘Never heard of any other London-listed company to adjourn AGM so abruptly and repeatedly. GCM failed their shareholders last December by postponing AGM with 36 hours notice. They did not hold their 2019 AGM. A second postponement in three months, and at such short notice, means that London Stock Exchange now needs to investigate whether GCM is in breach of the law. What does the company have to hide, postponing their AGM for a second time, with less than 24 hours notice and again citing security concerns?’

Protest and picket were organised by the Phulbari Solidarity Group alongside a wide coalition of organisations at the AGM of the AIM-listed mining company GCM Resources Plc on Tuesday as it has no viable asset to its name, and has not held a license for coal exploration or mining in Bangladesh since 2006. Instead of picketing at GCM’s AGM, for what would have been the 11th consecutive year, campaigners met at the Imperial College London to discuss how to respond to GCM’s latest move, and joined the occupation for Democratisation, Decarbonisation and Decolonisation of the University.

In Bangladesh, angry Phulbari communities demonstrated in the town centre on Monday morning opposing GCM’s London AGM, and demanding trial of its officials, to withdraw false cases against Phulbari community organisers, and full implementation of their six-point agreement with the government. The demo lasted for two hours amid a huge police presence. Communities are now organising a long-march from Phulbari to Dinajpur to be held on 30th March under the banner of the National Committee of Bangladesh to Protect Oil, Gas, Mineral Resources and Power-Port. The long-march will demand an end of speculation about whether GCM can obtain a license, to remove the GCM Resources office from Phulbari, and to take legal action against the company for fraud and harassment of Phulbari residents.

Professor Anu Muhammad, the leader of the National Committee to Protect Oil, Gas, Mineral Resources, Power and Ports of Bangladesh said, ‘People’s resistance against GCM is still strong despite an environment of fear and surveillance. GCM’s fraudulent and illegal business must be stopped immediately by delisting it from the London Stock Exchange to stop its continuing manipulation and corrupt attempts at coal mining along with Chinese companies, its harassment of community leaders, and preparations for violent crimes against people and environment in the form of open cast coal mining and displacement.’

On 26 August 2006 three boys were shot dead, and more than two hundred injured by paramilitary forces in a peaceful demonstration of 80,000 people against the mine. Annual ‘Phulbari Day’ rallies have been held every year in Phulbari and across Bangladesh, commemorating the deaths and protesting the company’s continued plans. Recently, GCM’s CEO Gary Lye has filed multiple cases against 26 community organisers in Phulbari claiming he has felt ‘harassed’ when he visited the area in an attempt to continue coal mining plans in 2014. Lye demands $2.6million as his compensation from the community representatives who stopped him.

In August 2019 the Deputy State Minister for Power, Energy and Mineral Resources, Nasrul Hamid, made this statement to the daily Prothom Alo newspaper, ‘Even in the absence of an agreement, GCM or Asia Energy is trading shares in London by providing information that coal would be extracted from Phulbari, which is false. The government has taken this into notice. The government is proceeding to take legal action against them.’

He stated that the Prime Minister Sheikh Hasina’s clear instructions are that the government has no plans to extract coal from Phulbari, and the future extraction of coal would only be considered if any advanced and environmental mining or coal burning technology emerged.