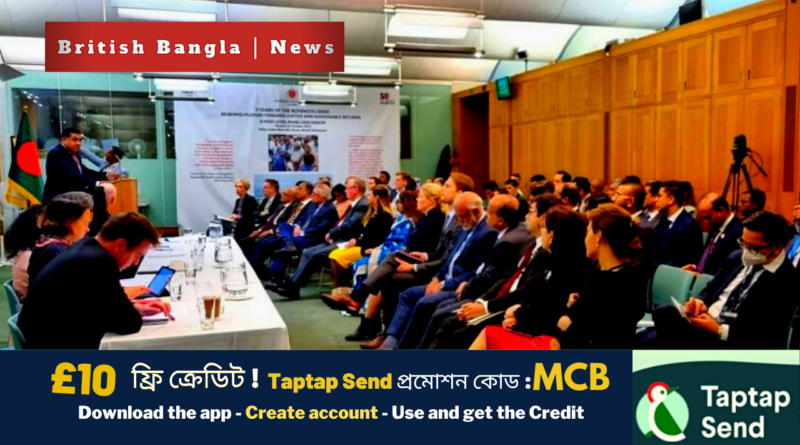 Ansar Ahmed Ullah: In a high-level panel discussion titled “5 years of the Rohingya Crisis: Renewed Pledges towards Justice and Sustainable Returns”, organised by Bangladesh High Commission, London at the UK Parliament on Monday, 24 October, Bangladesh’s State Minister for Foreign Affairs Md Shahriar Alam said, “A political transition in Myanmar won’t automatically fix the Rohingya problem in the absence of justice and accountability. That is why this time around, accountability must be ensured, justice must be delivered, and impunity must not be allowed by the international community to ensure the return of the Rohingyas to their homeland Myanmar.”

The state minister said that each year under the generous patronage of Prime Minister Sheikh Hasina, Bangladesh spends 1.22 billion US dollars for food, shelter, health, education and skill development of the Rohingyas, which is increasing while international assistance is declining.

He further said, “After five long years of hosting Rohingyas, it is unjust and unfair that only Bangladesh will continue to carry this undue burden. We, therefore, call upon more Commonwealth, OIC members and western countries to join the ICJ case by the Gambia, which will expedite the justice for Rohingyas and facilitate their early return.

Speaking on the occasion, Minister of State for the Middle East, South Asia and the United Nations at the UK FCDO, Lord Tariq Ahmad of Wimbledon, paid tribute to Bangabandhu Sheikh Mujibur Rahman for his lifelong struggle to establish peace and justice and lauded Prime Minister Sheikh Hasina for showing ‘incredible generosity and humanity’ to host and protecting over a million Rohingyas.

Recalling Prime Minister Sheikh Hasina’s speech at the 75th UNGA, Bangladesh’s High Commissioner to the UK, Saida Muna Tasneem in her opening remarks said, “The cost of the prolonged presence of Rohingya on Bangladesh’s society, security, resources, economy, environment and ecology is huge, immeasurable and in some cases irreversible. So, their repatriation, the only sustainable solution to this crisis, is a must and needs to be expedited by the international community.”

UK’s Shadow Minister for Asia and the Pacific Catherine West MP, Chair of UK All-Party Parliamentary Group on Bangladesh and the Right of the Rohingya Rushanara Ali, MP, Vice Chair of All-Party Parliamentary Groups on Bangladesh and Myanmar Tom Hunt MP, Solicitor General of the Gambia Hussein Thomasi, High Commissioner of Maldives to the UK Dr Farah Faizal and High Commissioner of Canada Ralph Edward Goodale spoke on the occasion.