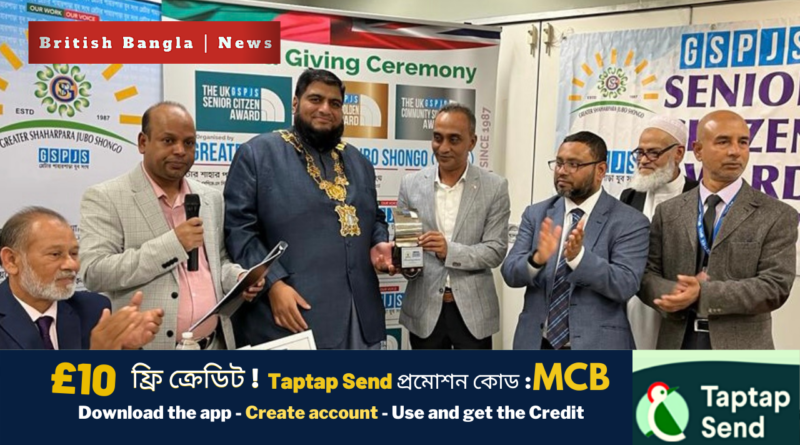 News Desk: The award ceremony of Greater Shahar Para Jubo Shongo in the United Kingdom was completed in a grand manner in the presence of all.

Abdus Shubhan Kamali, president of the organization, presided over the award ceremony in a hall at East London on 4th October Tuesday, under the overall supervision of the Greater Shahar Para Jubo Shongo.

The program was conducted by the general secretary of the organization Muhammed Shahed Rahman.

Councilor Shafi Ahmed Speaker of the London Borough of Tower Hamlets Council was present as the chief guest at the Award ceremony 2022.

Councilor Maiyum Talukder, Deputy Mayor of Tower Hamlets, was present as the Guest of Honour.

Abdur Rahim Kamali, organization’s Advisor and chair of the Award committee 2022, gave a welcome speech at the event.

In the speech of the chief guest at the annual Award distribution ceremony of the Greater Shahar Para Jubo Shongo in London, Councilor Shafi Ahmad, Speaker of London Borough of Tower Hamlets Council , said – Youth in the country and abroad should be dedicated and work like the Shahar Para Jubo Shongo. Such organizations and conscious citizens must work together to build a peaceful, secure and prosperous country.

In the speech of the special guest, Councilor Maiyum Talukder, Deputy Mayor of Tower Hamlet Council, said that everyone should come forward like Jubo Shongo for the Education development of the community and the state.

This organization is playing a unique role in the development of education and the welfare of humanity. The role of this organization is immense in the implementation of various philanthropic projects in rural Villages in Bangladesh, especially in their own villages.

The annual award-giving ceremony in 2022 under the overall supervision of Greater Shahar Para Jubo Shongo Awarded awards in 3 categories for special contributions to the community in education development and human welfare.
The guests presented the crest to the awardees in the ceremony.