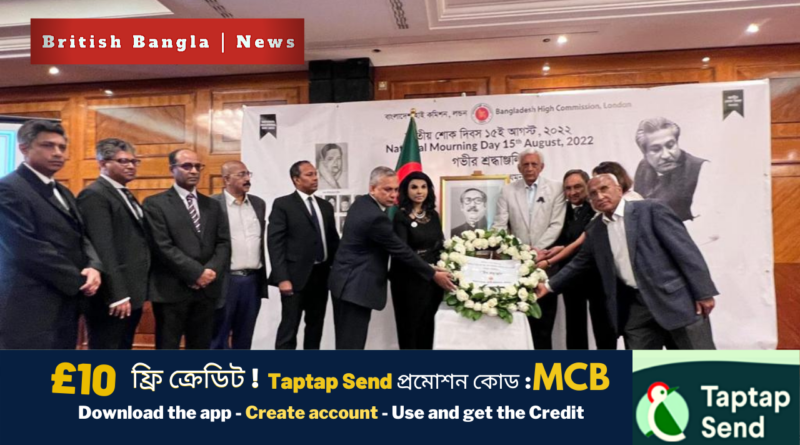 International Relations Affairs Adviser to the Prime Minister Professor Dr Gowher Rizvi, while speaking as the chief guest at Bangladesh High Commission, London’s commemorative event on the 47th anniversary of the martyrdom of Father of the Nation Bangabandhu Sheikh Mujibur Rahman and the National Mourning Day, said, “Following Bangabandhu’s brutal assassination on 15 August 1975, the killers also plotted to murder Sheikh Hasina and Sheikh Rehana abroad, which was prevented by the host government of their country of residence at the time.”

Dr. Rizvi, an internationally renowned historian and researcher, said, “The main goal of the conspirators was to take back the country to pre-independence state and prevent Bangabandhu from establishing a progressive, secular and Bengali nationalism-based Bangladesh by killing him. Sufficient evidence of these has been found. They will be disclosed in due course.”

High Commissioner for Bangladesh to the UK Saida Muna Tasneem delivered the commemorative speech at the high-profile event, organised on 15 August at a hotel in the Royal Borough of Kensington where Shadow Minister for Asia and the Pacific Catherine West, MP and Vice Chair of All Party Parliamentary Group on Bangladesh Lord Sheikh were the special guests. An eminent member of the student action committee of the 1971 overseas freedom movement for Bangladesh liberation in the UK, Syed Mozammel Ali, also spoke on the occasion.

Paying profound homage to Bangabandhu and all the martyrs of the 15 August 1975 carnage, High Commissioner Saida Muna Tasneem said, ”The premeditated brutal assassination of Bangabandhu to eliminate his entire family and the secular and progressive values by a few treacherous anti-liberation, anti-democracy and anti-secular forces is also recorded as an incident of unprecedented barbarism in human history and a gross violation of international humanitarian law as it stands apart from political assassinations of other contemporary leaders such as Abraham Lincoln, Mahatma Gandhi, Martin Luther King and John F Kennedy.”

The High Commissioner said, “Even though the assassins tried to silence the Father of the Nation, Bangabandhu lives on in the hearts of hundreds of millions of Bengali people, while his vision for a self-reliant Golden Bengal is being carried forward by his missionary, courageous and dynamic daughter, Prime Minister Sheikh Hasina. Bangladesh, under Prime Minister Sheikh Hasina’s Vision 2041, is not only en route to graduating into a Middle-Income Country leapfrogging its economic growth to unprecedented heights as the fastest growing economy of South Asia but has also reached a new milestone of self-reliance by unveiling its first self-financed mega-project, the Padma Bridge, to be followed by our nation’s first Metro Rail and Nuclear Power Plant.”

The High Commissioner also said, “The progressive, inclusive, democratic and secular value-based Bangladesh-UK friendship that Bangabandhu pioneered in 1972 led to the UK becoming Bangladesh’s third largest trade and investment partner, the largest remittance sending country in Europe, the most active partner in climate change and sustainable development, as well as the home of enterprising Bangladeshi-British and Bangladeshi-Irish citizens.”