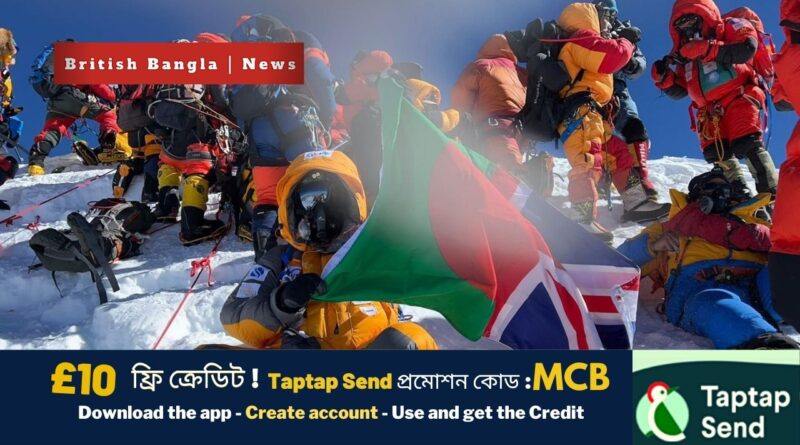 Akke Rahman has officially become the UK’s first British Bangladeshi Muslim to climb Mount Everest, the highest mountain on earth. He reached the summit of the 8,849 metre peak on the early hours of Friday 13th May 2022. Akke Rahman took the challenge for ‘Peak Humanity,’ an initiative to raise funds for refugees and other humanitarian causes to support twenty six appeals of Channel S’ Ramadan Family Commitment (RFC).

Hailing from Oldham, UK, Akke Rahman is exhilarated at achieving the record “mission of my life” and expressed his euphoria to Channel S TV, a British Bangladeshi satellite TV station. An ecstatic Akke Rahman explained, “I just couldn’t believe that I was on top of the world. It was just so difficult, I was exhausted, but I knew I had to complete this mission. The weather was extremely cold, windy and rough.  You cannot predict what will happen in a split second. For three or four days while I was climbing to the top, I was living on a couple of Snicker bars a day.”

While climbing towards Mount Everest, Akke Rahman and his team saved the life of another mountaineer who was running out of oxygen. “It was a guy called Les….” Rahman explained. “He was from a different group where we got to know him. He ran out of oxygen at 7,800 metres. We had to stick together. I just said to the guys we have to share the oxygen…I don’t care how we get down. We have to get down to Camp 2 at 6,400 metres where we will be ok. We did radio the Sherpas to get some oxygen, but they didn’t get back to us. One of my teammates suggested we give Les his oxygen and bring him down safely. I wasn’t going to leave him behind. We brought him down safely.”

Farhan Masud Khan, Head of Programmes at Channel S Television, and manging Akke Rahman’s ‘Peak Humanity’ campaign, spoke to his expedition management team Makalu Adventure. Mohan Lamsai, Chairman of Makalu Adventure kept Khan updated prior and post the completion of Akke Rahman summitting Mount Everest. Farhan Masud Khan said, “We were constantly trying to communicate with Akke but it was impossible to have any smooth contact due to the high altitude. We are enormously thankful to his brilliant support team who kept us informed on Akke’s whereabouts. They informed us as soon as Akke reached the top of Mount Everest. We were extremely relieved that he was safe, happy and had completed his mission.”  Farhan Masud Khan further explained, “He made us all proud, but most importantly his sacrifice will benefit those who need our support now, including refugees from Ukraine and other countries.”

Prior to making his Mount Everest record, Akke Rahman already set a UK record time after climbing Mount Elbrus – Europe’s highest peak which stands 5,642 metres above sea level in Russia within 24 hours, and only five days after recovering from coronavirus. He also climbed Mount Kilimanjaro and Mount Blanc, the highest mountains of Africa and the Alps, respectively. He later completed Mount Amadablam, one of the highest mountains in the Himalayas (6856m). Akke Rahman’s passion for climbing and a desire to support those in need meant that he completed all the above expeditions within one year.

Akke Rahman explained, “We are living in challenging times. We thought Covid-19 was difficult, now look at the terrible situation in Ukraine, Afghanistan, Burma and other countries. When I see mothers struggling to feed their children, and kids rolling around hungry, it really impacts me to my core. They are crying out for help. I need to do something to help them.”

Father of three young children, Akke Rahman lives happily with his wife Hena Rahman in Oldham. Hena Rahman accepts the risks but candidly asserted, “I always tell him how these expeditions are dangerous and ask him not to go, but he is a stubborn husband.”  Despite the risks and challenges of looking after three young children, Hena Rahman has previously expressed the proudness of her husband’s determination: “I’m extremely proud of what Akke will be doing in order to support vulnerable refugees, women and children. All I want is his safe return. That is the most important matter.”

Donating £15,000 to Akke Rahman’s fundraising campaign, Mr Lutfur Rahman, Chairman of Work Permit Cloud expresses: “He has inspired generations, risked his own life and left his young family behind to raise funds and support the most vulnerable and refugees. Akke Rahman is a legend and a fantastic role model for our country. We are extremely honoured to support his campaign.”

You can support Akke Rahman campaign by donating on justgiving.com/peakar, contacting Farhan Masud Khan on +447961079467 or email farhan@chsuk.tv, Instagram.com/akke_rahman | Twitter.com/AkkeRahman