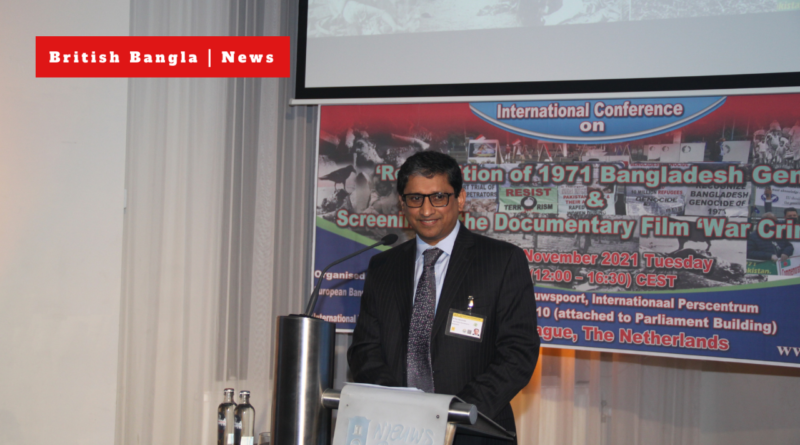 The conference was organized by the Europe-based Bangladeshi diaspora organisation, European Bangladesh Forum (EBF) in collaboration with Switzerland Human Rights Commission Bangladesh on 30 November 2021 at the at Nieuwspoort, the Internationaal Perscentrum (attached to Parliament building) in the Hague, Netherlands. It may be mentioned that the Hague conference was the follow-up of the Geneva conference held on the same issue on 30 September 2021 at the Geneva Press Club in Switzerland. A documentary film titled, ‘War Crimes 1971’was screened at the start of the conference.

It may be recalled that in 1971 Pakistan military and their local collaborators committed one of the worst mass atrocities that the world witnessed in the 20th century. The Pakistani occupation army in 9 months killed approximately 3 million people, violated over two hundred thousand girls and women and forced 10 million people to cross the border and take shelter in India. This number of people killed by the Pakistani Army is the highest in the world in such a short period of time. The 1971 Genocide by the Pakistan Army is well documented and reported in the international media and also in the diplomatic correspondences during that period.

Speakers opined that international recognition of any crime against humanity, in this case here against Bangladesh is of immense importance and absolute necessity to show respect and honour to the three millions victims and their family members by recognising the 1971 Genocide in Bangladesh. Recognition of Genocide is essential to create a world free from violation of human rights and for the the safety of our next generation across the whole world. Because, they argues, if the world community don’t recognize a crime as a crime, the world community keep the door open for that crime to happen in the future and that is exactly what is happening in Pakistan today in Baluchistan, Afghanistan and other parts of the region. Unfortunately, Bangladesh GENOCIDE has today become a forgotten chapter in the history and we know the common phrase, ‘Justice delayed, justice denied’.

Speaking on the day from Canada via on-line former Canadian Ambassador in Afghanistan & former Minister of Canada Mr. Christopher A. Alexander, PC said 1971 was not just a tragedy for Bangladesh, it led the Pakistani army to refocus its efforts away from conventional warfare and towards regular war.The ISI policy has been ignored for far too long and some have denied It, some have fallen victim to disinformation, some have been lobbied to turn a blind eye, but those days are ending.

Bangladesh ambassador in the Netherlands Mr. M Riaz Hamidullah said, the first step is to understand what we are here for. And becauseWe live in a world of competitive issues we have to come to the point where we say, how much, -and how far we can go.

Communications Director of Swiss InterStrategy Group & ‘Friend of Bangladesh’ Award Recipient Mr Chris Blackburn while addressing the conference said, ‘we can’t rest on our laurels, the issue of recognition for the genocide of 1971 is very important. We know that this issue has been fought over and sabotaged. Pakistan needs to apologise. As activists we need to keep having meetings like these. We need to keep informing people about 1971. We need to consolidate and make new friendships with like-minded people. Afghans, Baloch and Hazaras especially.’

Professor Dr. Nuzhat Choudhury, a member of the 1971 Genocide victim family in a video message sent from Dhaka said, what the Pakistani army did with us in Bangladesh, are now doing the same thing in Baluchistan. She added, Pakistan has become the credal of terrorists, they helped the Taliban to develop. Pakistan is causing terrorism not in its own country, but it is spreading terrorism across the region particularly its Secret service ISI are still causing disruption in Bangladesh in the name of religion and their continuing to do so in the west as well.