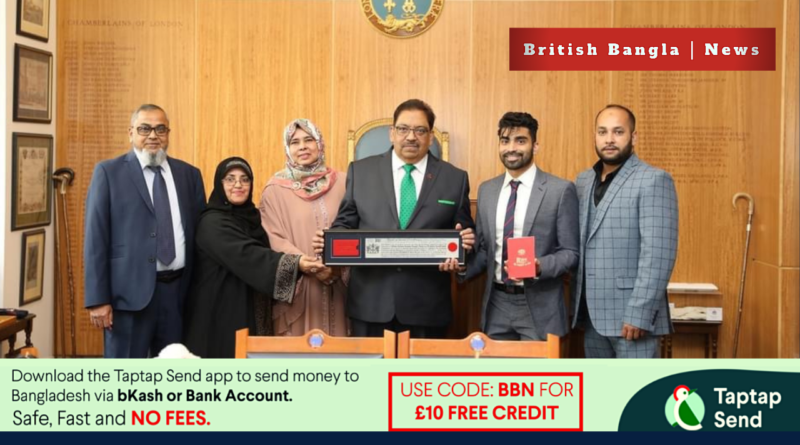 Clerk to the Chamberlain Murray Craig presented the award to Ahmed us Samad Chowdhury, who was present with his family at the ceremony. After receiving the ‘Freedom of the City of London’ award, Ahmed Us Samad Chowdhury JP reacted by saying, “This award will encourage people in the community to do good deeds.”

It is to be noted that this rare honour is given to those who have been making extraordinary contributions in various fields. The prestigious award was given to the current Queen Elizabeth II of Britain and her mother Elizabeth I. In addition, the British Prime Minister Winston Churchill, Margaret Thatcher, Duke of Wellington, Nelson Mandela, Jawaharlal Nehru, Archbishop of Canterbury, former UN Secretary General Kofi Annan received the award.

Ahmed us Samad Chowdhury JP, is from Fenchuganj, Sylhet, Sylhet, Bangladesh. He received his primary and secondary education in Bangladesh. Ahmed us Samad completed his primary education at Durgapur Primary School in his village and studied at Fenchuganj Fertilizer Factory High School and PPM High School. He moved to the United Kingdom in 1972. After passing O-Level from the City of Bath College he first enrolled in South Bristol College of Business Administration and later completed a higher degree in the City of Bath College. While studying at City of Bath College, he was elected VP. Later, he was appointed the governor of that college.

After completing his higher education, Ahmed Chowdhury devoted himself to establishing a business. Ahmed us Samad Chowdhury, a life member of the Commonwealth Judges and Magistrates Association since 1991, is a socio-cultural and heritage conscious person who has been working tirelessly for the development of his own community in Great Britain and Bangladesh.

In 1991, Ahmed Chowdhury was appointed as a Justice of the Peace (JP) from the Bangladeshi community in Britain for his honesty, dedication, experience and wisdom.