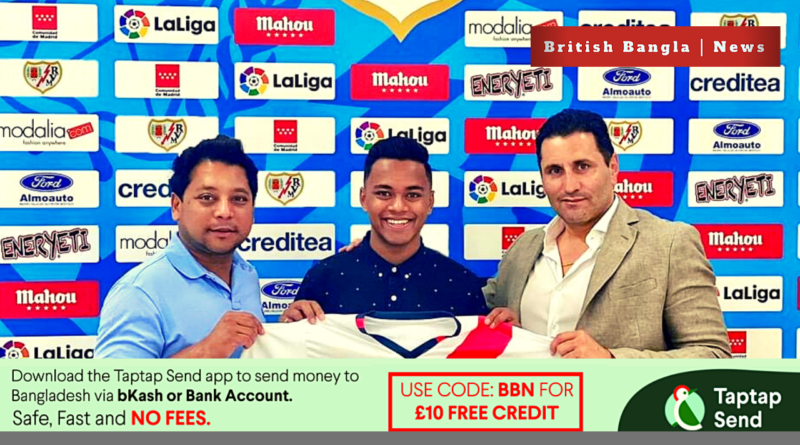 Zidan Miah in his Facebook page has commented,
“ I’m very proud to announce that I have signed with Rayo Vallecano FC for the 2021/2022 season. I would like to thank the club for giving me this opportunity and for believing in me. To my coaches and mentors, current and over the years, a very big thank you for all your support, time and love.

I would also like to thank my family for all they have sacrificed over the years, without them I wouldn’t be where or who I am today.

Lastly I would like to thank those who have followed my journey through social media, especially those in my country of origin, Bangladesh. Your support doesn’t go unnoticed, thank you for all the love you have shown me.
The hard work starts now! Big 2021/2022 season incoming…”

Football lover Zidan’s father, Sufian Miah, told about his son’s success –
I am proud of Zidan’s achievement so far,  as a father. I wish him all the best so that he can become a big football player in the future and become the role model to inspire the talented younger generation of Bangladeshi footballers.

Zidan was born and raised in  London. Since childhood, he has a dream to become a professional footballer to play flight football. His parents have always supported and encouraged him to achieve his dream.
He began his footballing career when he 7 years old at the David Beckham Football Academy in England then moving to play in various academies including Arsenal development centre in England.,Eventually moved out to USA at the age of 12years old with his mother Shipa Miah and younger sister Zara Miah after obtaining a six years scholarship at the Micheal Johson Centre and signing for FC Dallas Academy. Sufian Miah
and his eldest daughter Sara Miah stayed in England and visited the family on a regular basis. This is one of the major sacrifices that Zidan and the family went through while chasing Zidan’s dream to become a professional footballer.

Zidan returned back to in England at the age of 18years and signed for English club Bromley FC U23.

Zidan’s father, Sufian Miah, is a prominent businessman and Zidan’s mother Shipa Miah is a housewife.
His parents hail from Moulvibazar, Sylhet, Bangladesh.

You can follow Zidan’s future in the football world on