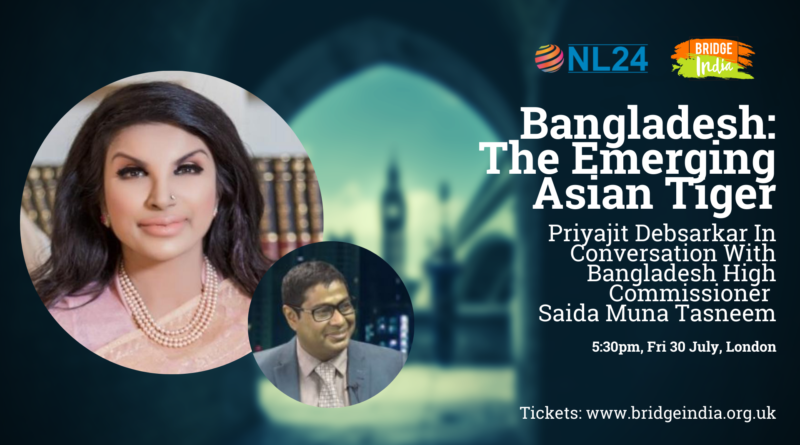 The Q&A with Bangladesh High Commissioner to the UK Saida Muna Tasneem on “Bangladesh: The Emerging Asian Tiger economy”, is being hosted by Priyajit Debsarkar of Bridge India Foundation UK in partnership with Bengali diaspora TV Channel NL24 on 30 July.

Saida Muna Tasneem was born in Dhaka. Her family moved to Beirut, Lebanon, in 1975 for her father to complete his PhD at the American University of Beirut. She graduated from the Bangladesh University of Engineering and Technology with a BSc in Chemical Engineering. She later completed her MSc in public policy and management at SOAS.

In 2014, she was appointed as Bangladesh’s permanent representative to the United Nations Economic and Social Commission for Asia and the Pacific. Tasneem became the Ambassador for Bangladesh to Thailand and Cambodia in November 2014. She is additionally Ambassador to Ireland and Liberia and the first female to hold those positions.

Bridge India is a progressive non-profit think tank dedicated to discourse on public policy. Priyajit has written extensively on the Bangladesh Liberation War 1971, both books and newspaper columns.