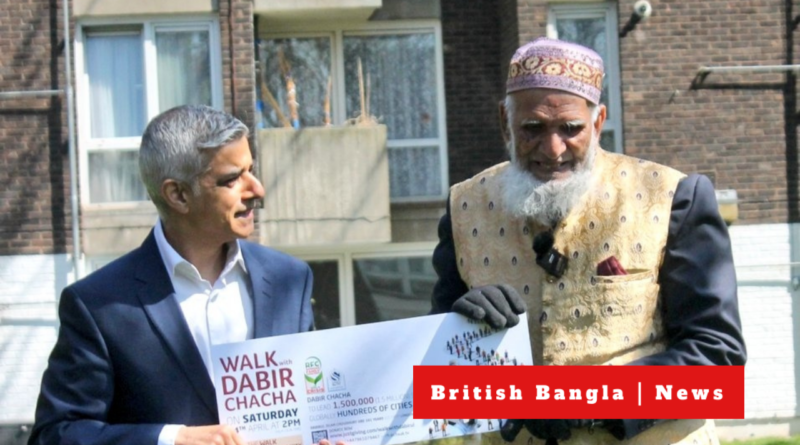 Ansar Ahmed Ullah: The Mayor of London Sadiq Khan accompanied 101-year-old Dabirul Islam Choudhury OBE in his bid to lead a global challenge named ‘Walk with Dabirul’ to complete 1.5 million steps. The challenge was launched on 24 April, aims to raise funds for COVID-19 victims in the UK, Bangladesh, and globally.

At the event, Sadiq Khan remarked, “101-year-old Dabirul Choudhury OBE has already raised 420K for Covid relief and it’s a real honor to accompany him on his latest charity walk. Fasting isn’t easy! Yet here Uncle Dabir is observing Ramadan and showing the true spirit of our city.”

It should be mentioned here that Dabirul Islam Choudhury raised £420,000 in 2020 by walking in his communal garden during Ramadan. As a result, last year he was awarded an OBE (Order of the British Empire) in the Queen’s Birthday Honours for raising funds for coronavirus charities.

More than 180 global cities have signed up from London to Paris, New York to Dhaka, to accomplish Dabirul Islam Choudhury’s mission to walk in parks, open spaces, and gardens. In a recent interview with BBC London, the 101-year-old Brit Bengali Muslim Dabirul Islam Choudhury OBE said, “I will not relax in my life. I want to help people until my death”.

Atique Choudhury, Dabirul Islam Choudhury’s son said, “My Father has always been a very active and giving person”. Explaining his Father’s efforts to make life better for people, Atique Choudhury added, “This year he wanted to make it global, and 10,000 people will be joining the campaign Walk with Dabirul on 24th April.”

The funds will help people in the UK assisting with end-of-life support. Globally, it will help people suffering in refugee camps in the Middle East, Rohingyas and provide food, shelter, education to women, children, and COVID-19 stricken families of more than 50 countries via Ramadan Family Commitment (RFC), a UK based Bengali satellite Channel S TV initiative.

Dabirul Islam Choudhury is the oldest British Muslim who is aged 101 and is leading the 1.5 million steps challenge while fasting during the 30 days of Ramadan.