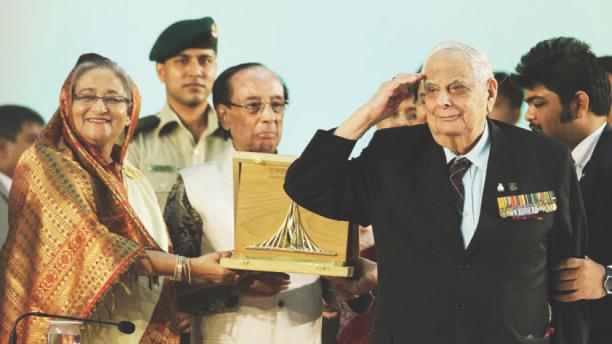 Today we are remembering, as no doubt some of you may do every day, the appalling massacre of so many Bengalis, a slaughter particularly targeting the educated classes, following the Declaration of Independence of Bangladesh.

On this day of commemoration, I offer my heartfelt condolences to all those whose families suffered such terrible losses. I come from a people and a family who know far too well what it is to have such a history.

It is to the credit of Bangladesh as a nation that despite such a traumatic and bloody birth, it has emerged as a stable, tolerant and cultured democracy, one to be proud of.

It is a little known fact, something I first learned about through the Swadhinata Trust, that one of the heroes of the Bangladesh War of Independence was Jewish. Lt Gen, later Maj-Gen, Jacob Farj Rafael Jacob, was born into a religious Jewish family in Calcutta (now Kolkata), West Bengal, British India, in 1923. His family were Baghdadi Jews originally from Iraq who settled in Kolkata in the middle of the 18th century.

It was the reports he heard of what was happening to the Jews in Europe that made him decide to join the British Indian Army in 1942.

During the Bangladesh War of Independence in 1971, as Chief of Staff of Eastern Command, he was responsible for the defeat of the Pakistani Army in the Eastern Region, for which he received the Commendation of Merit. He died in 2016 and is buried in the Jewish cemetery in Delhi.

He is best known for the role he played in the Indo-Pakistan, Bangladesh War of 1971 and the Liberation of Bangladesh. Maj Gen Jacob served as the Chief of Staff of the Indian Army’s Eastern Command during the war. On 15 December 1971, Maj Gen Jacob sought permission to visit Pakistani Lt Gen Niazi to seek his surrender during a lull in the battle. He flew to Dhaka and obtained an unconditional surrender from Lt Gen Niazi. The war was a significant victory, with nearly 90,000 Pakistani soldiers surrendering to the Indian Bangladesh Joint Command. Dhaka fell, despite the fact that there were 26,400 Pakistani soldiers in the city and only 3,000 Indian soldiers in the immediate area.

During his 36 year career in the army, he also fought in World War II and the Indo-Pakistan War of 1965.

Finally, I wish to thank you for allowing me the privilege of speaking at this event. And for tomorrow, the 50th, Golden anniversary of the creation of Bangladesh, may I offer in advance my congratulations. As we say in Hebrew: Mazel tov