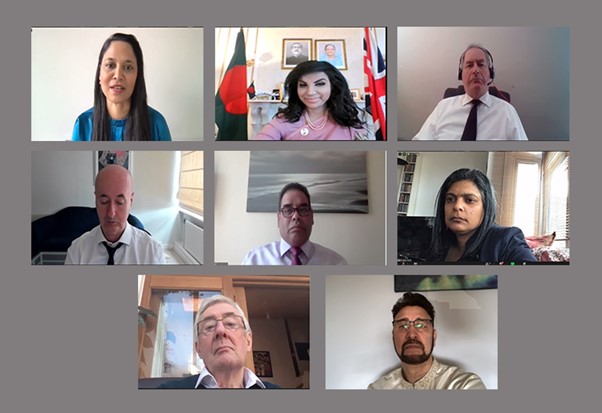 “Bangladesh’s bilateral relations with the United Kingdom since 1971 has been guided by Father of the Nation Bangabandhu Sheikh Mujibur Rahman’s secular, progressive, and peace-centric values and foreign policy,” said Bangladesh High Commissioner to the UK Ms Saida Muna Tasneem while speaking at a virtual meeting of the UK Parliament’s All-Party Parliamentary Group on Bangladesh (APPG) held on 15 April to celebrate the 50th anniversary of Bangladesh’s independence.

The APPG Chair Rushanara Ali, MP, said, “As a British-Bangladeshi, I am extremely proud to mark the 50th anniversary of Bangladesh’s independence. I pay tribute to all those who sacrificed their lives for our freedom and independence. We are forever indebted to them.” Ms Ali also paid tribute to Bangladesh’s Founding Father Bangabandhu Sheikh Mujibur Rahman on his Birth Centenary.

During the meeting, the High Commissioner raised two issues of concern with the APPG, including the recent red-listing of Bangladesh by the UK and the protracted Rohingya crisis. High Commissioner briefed the Parliamentary Group about the inconveniences and obstacles caused by the red listing of the Bangladeshi passport holders, severely affecting the bilateral trade in the ready-made garments, food and beverage sectors, and emergency medical treatments. Praising the British Government’s role on the Rohingya issue, especially as the pen-holder in the UN Security Council, the High Commissioner called upon the APPG to keep the issue of the sustainable and dignified return of the Rohingyas back to Myanmar high on its agenda at the British Parliament.