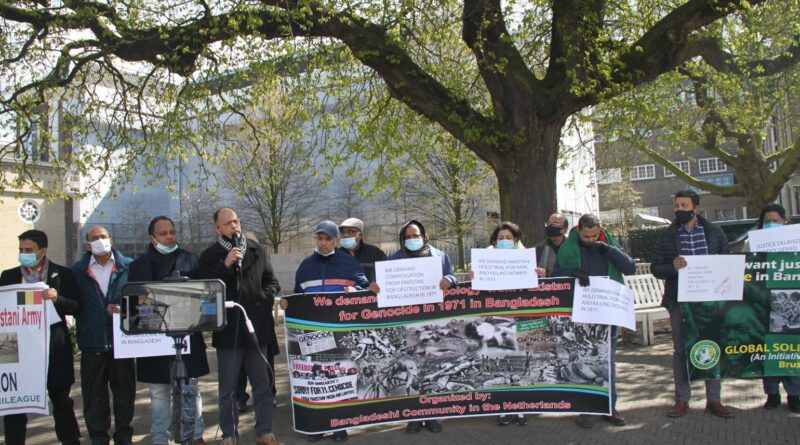 Ansar Ahmed Ullah : The Europe-based Bangladeshi diaspora organisation, European Bangladesh Forum (EBF) organised a demonstration on 14 April 2021 to demand an ‘unconditional official apology’ from Pakistan for the genocide they committed in Bangladesh during 1971. The demonstration took place at Paleisstraaat, close to Pakistan Embassy in the Hague, participated by the Bangladeshis living in the Netherlands, Belgium and Germany.

The demonstrators carried banners, placards depicting the atrocities committed by Pakistani soldiers and chanted slogans demanding punishment to those responsible for the genocide. Organisations of Bangladesh origin from the Netherlands, Belgium and Germany took part in the event including, Netherlands Awami League, Belgium Awami League, Bangabandhu Foundation Germany, Netherlands Awami Jubo League and Global Solidarity for Peace, Belgium amongst others.

The speakers at the demo demanded of the world leaders, including the European governments, to hold Pakistan responsible for the crime in the International Criminal Court and International Court of Justice. They said the world media, including The Telegraph, The Times, The Sunday Times, The New York Times, and several news agencies, reported the Pakistan Army’s Bengali massacre. Pakistan Army systematically also killed Bengali intellectuals and professionals. They added that the Pakistan government promised to try the key Pakistani army officers and soldiers responsible for the genocide but has not tried them.

In a petition to the Pakistani Ambassador Shujjat Ali Rathore, the organisers demanded that the Pakistan government offer an official unconditional apology for the genocide committed in Bangladesh during 1971, try the Pakistan army and civil officials who were responsible for the genocide, provide compensation to the families of those killed and compensate Bangladesh for the destruction of the national assets and take back the stranded Pakistanis (Biharis).