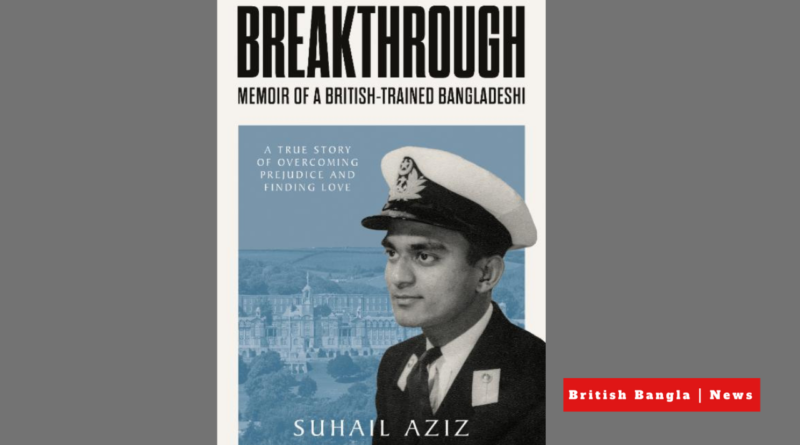 Breakthrough is a memoir of a British Bengali Suhail Aziz and his personal story of love and prejudice. Suhail Aziz is best known within the UK Bengali community for his involvement with the CRE, the Commission for Racial Equality. The book also charts his struggle in the UK and his career in public service. While the book is a memoir, it does cover some milestones of the Bengali community, from the partition of the Indian sub-continent to Bangladesh’s creation. And as we approach the Golden Jubilee celebration of Bangladesh, there is a chapter on the Bangladesh movement in Britain.

Suhail Aziz was born in Sylhet. He joined the Pakistan Navy and, after initial training in Pakistan, he entered the Britannia Royal Naval College, Dartmouth, England, where, on completion of his training, he was commissioned by the British Admiralty. While in Dartmouth, he met and fell in love with Anna, later to be his wife. Unfortunately, his love led to tensions with the Pakistani authorities resulting in dismissal from the Pakistan Navy for his marriage to a foreign national. After his dismissal, Suhail Aziz served in East Pakistan’s Inland Water Transport Authority and Unilever Factory, Chittagong, before returning to the UK in 1966 with his family.

In England, Suhail Aziz started out as a ticketing clerk at a rail station in an outer suburb of London before a change in jobs led him to a direct-entry, permanent commission in the Royal Air Force (RAF). This was the beginning of Suhail Aziz’s career in the UK. After leaving the RAF, Suhail Aziz work at the Ford Motor Company, the Mars Group and finally as a Director at the Commission for Racial Equality (CRE).

The book came out last year but due to the Corona pandemic outbreak and restrictions, the publishers were unable to launch it widely. The book is published by the Book Guild and is available from all good book shops.