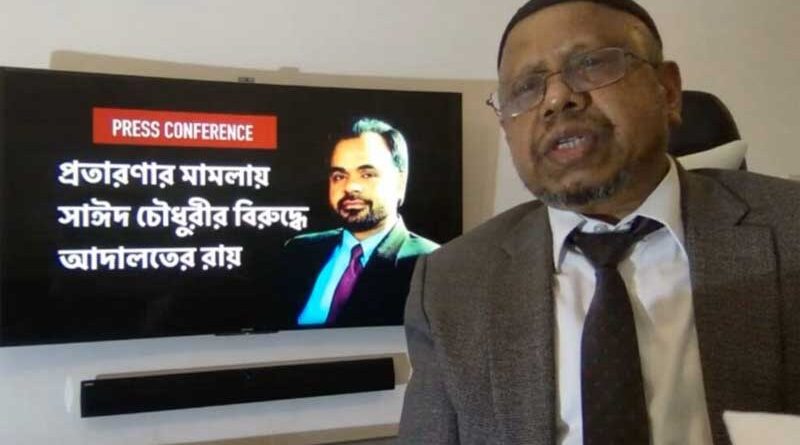 News Desk : Sayed Chowdhury, former MD of Excelsior’s Sylhet hotel resort, has been ordered to repay investor Abdul Bari, Taka 53 lacs by a British court. Abdul Bari, the Claimant in the case, an investor in Excelsior resort, known as Zakaria City in Sylhet and Director of the Royal Regency, London made the details available at a virtual press conference organised by the London Bangla Press Club on 9 February 2021.

In a written statement, Abdul Bari said, “I filed the case of fraud and forgery against him and Excelsior Sylhet Limited in the British High Court in a bid to bring Sayed to justice. I sued him to get my personal investment of Taka 53 lakh. Judge Saunders of Central London County Court announced the verdict on 27 October 2020. In the case, Sayed Chowdhury was identified as someone providing half-truths or false representations. Sayed Chowdhury was personally convicted in the case. The court has ordered him to repay my Taka 53 lakh investment, court expenses, and interest within 14 days.”

In the press conference, it was said the fact that Sayed Chowdhury’s fraudulent misrepresentation was proved in a British court is a unique milestone for other UK expatriate investors who have suffered. In the days to come, it will be a great example for those who have been deceived in the name of investment.

Abdul Bari said that in early 2016, I filed a case in the British High Court against Sayed Chowdhury and Excelsior Sylhet, alleging falsehood and fraud. It was later transferred to the Business and Property Section of the County Court in Central London. The Judge was H H J. Saunders. The case was heard for five days from July 27 to July 31, 2020, after a long two-and-a-half-year exchange of documents and evidence. On October 27, the Judge announced a 22-page verdict with a detailed explanation of the case.

The Judge said having found that at least four false representations were made by the Defendant it was unnecessary to continue and determine other allegations. In view of the above determination, the Judge awarded damages to the Claimant in the sum of 53 lac Taka with rescission.

Abdul Bari said the court had also issued an indefinite injunction on the property owned by Sayed Chowdhury and his wife Afia Khatun Chowdhury in a final verdict on 3 February 2021 in response to a separate application to ensure his refund. The injunction will apply to all their assets, including their assets in England and Wales and Sayed Chowdhury’s Bangladeshi assets and business share.