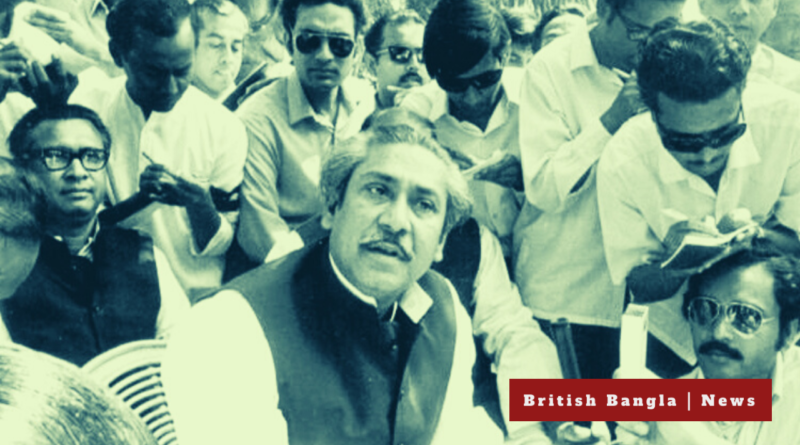 Bangabandhu (Friend of Bengal) Sheikh Mujibur Rahman was the founding father of the present-day People’s Republic of Bangladesh. The year 2020 marks the hundredth year of his birth and he will be most certainly remembered as the person who had changed the course of history in a single-handed fashion. The Indian subcontinent was trifurcated based on belief and Sheikh Mujibur Rahman was perhaps one of the handful few who revolted against this fundamentally flawed foundation, denouncing the polarization of society instead of cultural coherent co-existence which had existed for thousands of years. He most certainly was the death knell in the coffin of the two-nation theory which was buried forever in the Bay of Bengal on 16th December 1971.

Born on 17th March 1920 in the village of Tungipara of Gopalgunj Sub Division of Faridpur district in the province of East Bengal, was one of the founders of the East Pakistan Muslim Awami League in 1948. As an astute young and dynamic aspiring politician, he rapidly raised the ranks from General Secretary (1953 — 1966) to the Supremo, President of the Awami League from 1966 to 1974. Graduate from the University of Calcutta in BA from 1944 to 1947 and continued his education at the University of Dhaka 1948 onwards. The first seeds of deep distrust and a feeling of alienation were sown during the imposition of Urdu as the only state language of both East and West Pakistan post-independence. The Bengali nationalism and blood were spilled out on the streets of Dhaka during the Language movement of February of 1952. Fascist forces of one unit in the deep state of West Pakistan finally capitulated on 21′ February and the day become immortal in history as the International Mother Language Day as adopted unanimously on the 30th General Conference by UNESCO held in 1999.

As the evaporation of democracy and liberal liberties continued unabated under the military junta from Rawalpindi, the population of the eastern wing was being squeezed and strangled beyond the limit to fulfill their whims and fancies of the autocratic dictatorship. One of the primary dollar cash crop revenue for the establishment was jute from the east and the forex revenues were disproportionately siphoned to fund the so-called great decade of development predominately in Punjab and Karachi. Under these terrifying times, Sheikh Mujibur Rahman proposed the six-point formula to seek middle ground to maintain the fragmented federation. It was the Charter of Survival and was aimed at the self-rule in the East with added autonomy to replace the iron fist of tyranny. The West Pakistani socio political-military agro complex was shaken to its core and exemplary retribution, a concocted case of sedation in the shape and form know better as The Agartala Conspiracy Case was conceived. Under unprecedented public pressure which was on the brink of a revolt, the establishment yielded and the case was dropped by the state. Sheikh Mujibur Rahman was freed from the shackles of despotism and was poised now to be the formidable challenger to the upcoming general elections of 1970. As fate would have had it a catastrophic cyclone struck the Bengal delta before the elections which served as a political catalyst to determine the fate of the union in the coming months. As estimated half-million souls perished and further havoc followed as the Dictatorship turned a blind eye for relief and rescue especially as none was allowed from neighboring India. The western world at large came to know of the magnitude of the calamity when Pandit Ravi Shankar and Beatles guitarist George Harrison performed at the Madison Square Garden in New York City, a charity concert for the refugees from East Pakistan. To date, it is the worst cyclone to have hit humankind.

It can be a rare exception to the martial rule, a free and fair election was ever held in the history of Pakistan in December 1970, and out of the 300 federal constituencies, Sheikh Mujibur Rahman’s Awami League swept the polls securing an absolute majority of 162 seats, an irrefutable mandate of the people of Pakistan. The long arm of the deep state created a roadblock to the path of democracy and deliberately obstructed the transition from autocracy to autonomy. A barbaric brutal genocidal military solution was adopted to fulfill the ambition and Operation Searchlight was launched on 25th March 1971 on the streets of Dhaka in which the students and the academics of Dhaka University were first obliterated. Soon Sheikh Mujibur Rahman was arrested and exiled in captivity to the west wing. The military crackdown opened the flood gates of refugees seeking shelter from extermination who poured into India by millions.

On 23rd November 1971, General Yahya Khan declared a state of emergency in all of Pakistan (East and West) and wanted the civilians to prepare for war. On the evening of 3rd December 1971 Sunday, at about 5:40 hours local time, the Pakistani Air Force (PAF) launched a pre-emptive strike on eleven airfields in north-western India effectively starting the war. On the eastern front, the Indian Army joined forces with the Mukti Bahini (Bengali resistance) to form the Mitro Bahini (Allied forces) for synergistic action. The strategy adopted in East Pakistan was a swift, three-pronged assault of nine infantry divisions with attached mechanized armoured units and close air support that rapidly converged on Dhaka (referred to as Dhaka Bowl), the capital of East Pakistan. Faced with insurmountable losses, the West Pakistani military capitulated in less than a fortnight. On 16th December 1971, the Pakistani forces stationed in East Pakistan surrendered. The Instrument of Surrender of Pakistani forces stationed in East Pakistan was signed at Ramna Race Course in Dhaka at 16:31 hours 1ST (Indian Standard Time) on 16th December 1971, by Lieutenant General Jagjit Singh Aurora, General Officer Commanding-in-chief of Eastern Command of the Indian Army and Lieutenant General AAK Niazi, Commander of Pakistani forces in East Pakistan. After a gruesome and bloody nine months’ struggle, a free Bangladesh was born. The country was free from the oppressive West Pakistani army of occupation. Sheikh Mujibur Rahman was subsequently released from captivity and became Father of the Nation, also assuming the office of Prime Minister. Bhutan was the first country to recognize Independent Bangladesh followed by India. The birth of Bangladesh is one of the bloodiest in the 20th century and the country is drenched in the innocent blood of millions of people who paid the ultimate price of sacrifice for their motherland. The blood of the innocents bears testimony to the darkest reckoning for the West Pakistani Armed Forces, politicians, bureaucrats and, collaborators in service in 1971.

Sheikh Mujib’s character was his unique uncompromising and fearless fighting legendary leadership encapsulated in a generous benevolent heart. The Prime Minister along with members of his family was mercilessly assassinated on 15th August 1975 by some dissidents of the Bangladesh Army. Despite this heinous crime, Bangladesh is making Bangabandhu’s dreams of a progressive and secular republic a reality under the leadership of his daughter Prime Minister Sheikh Hasina. The continuing ever perpetual significance of maintaining Mujib’s legacy of adamantine commitment to democracy and tolerance can only be reified with the shared partnership with all the co-joining countries; Intercontinental at large India in particular.

Priyajit Debsarkar, is an author and independent geo-political analyst specializing in Indian Subcontinent, based in London. Further details of books can be found in www.priyajit.co.uk