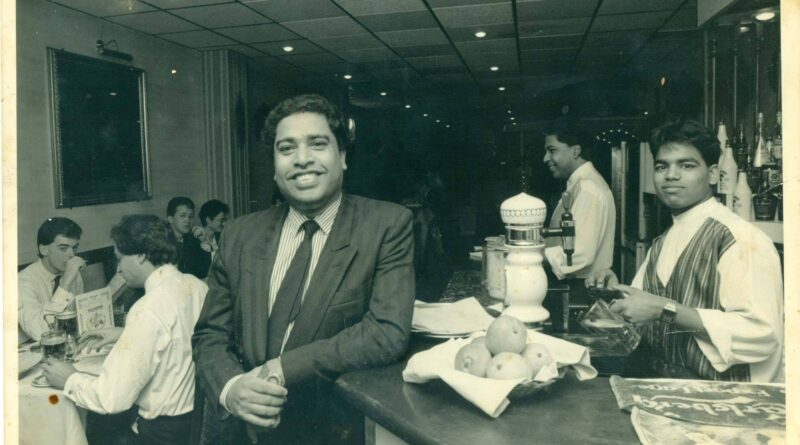 Ansar Ahmed Ullah: Abdus Salique, a well known face of Brick Lane, a cultural and community activist sadly passed away on 15 October 2020. The following article on Abdus Salique was written a few years back for another publication. In 2006 while he was the chairman of Brick Lane Trader’s Association, he led a campaign against the filming of Monica Ali’s Brick Lane, which he believed portrayed the local Bengali community negatively  https://www.theguardian.com/books/2006/jul/17/film.uk .

In the later years, he was spending more time in Bangladesh. He had recently arrived from Bangladesh only to fall ill and was at the Royal London Whitechapel Hospital while undergoing treatment at the time of his death.

Abdus Salique was well known for his song ‘Trade Union’ and was the lead singer of ‘Dishari’ band. In 2006 he was the chairman of Brick Lane Trader’s Association, as mentioned above, founder chairman of Banglatown Restaurants Association and owner of Bonoful Sweets and Salique’s Restaurant.

It was the early 1980s, my first job in London that brought me to the East End of London. I moved into Noble Court on Cable Street. At 34 Cannon Street Road, round the corner from Noble Court Salique bhai (Abdus Salique) had a shop. That is where I first met him. I am sure most will agree that Salique bhai is very sociable and talkative. We got talking and soon discovered that he was one of my uncle’s (Prof Shafique who taught at Madan Mohan College) student in Sylhet. On top of the shop, Salique bhai lived with his family. He had a cultural group ‘Dishari Shilpi Ghosti’ formed in 1979 that would practice upstairs. My close friend Sunahwar (Ali) used to go there quite often and I would often accompany him to Dishari’s practice and performances.

It was in the late 1970s several other youth and community organisations were formed. Some of these groups organised cultural activities, while others staged dramas. These groups were actively working with local Bengali youth and encouraged them to stand against racism and fight for equal rights. There were a number of drama groups and individual singers. Dishari Shilpi Ghosti was one of the first cultural singing groups that came into being.

Abdus Salique in his own words, ‘As I came to London suddenly and saw there was no Bengali music group but there were Indian and Pakistani music groups. There were some people who used to sing folk songs in their homes, with the dofki, dotara and other instruments. I thought it can’t be, we have to have our own cultural groups of our own to represent our country and our community.’ With this in mind, Salique bhai went about collecting like minded friends. He had a cousin who could play the tabla and he could play the harmonium.

The objective was to promote Bengali culture, music and dance. The aim was to lessen racial tension by exposing the indigenous community to Bengali culture and thereby promoting a better relationship between the communities.

Dishari’s first appearance was at Altab Ali Park. It was the first Bangladeshi carnival in the UK. It was a huge carnival. There were Bengali, Pakistani and Indian groups. Dishari was the only Bengali group at the carnival. Dishari’s performance went down a treat with the audience. People danced to Dishari’s songs.

Nearly all the newspaper gave Dishari huge coverage. Gradually Dishari became the only group who were representing the Bangladeshi community.

Dishari were the sole representative of the Bangladeshi community in the GLC (Greater London Council), the Labour Party and the Trade Union. Dishari started to perform across the UK including Cardiff, Scotland and Manchester. Salique bhai with Dishari started to perform on television. Dishari even got to perform at the prestigious Royal Albert Hall. Dishari led by Abdus Salique made five appearances in the Royal Albert hall and made thirty two appearances on television. Dishari was known as fairly radical as it tended to focus on social and political issues through music and dance. This was a time when racism was at its worst.

After the murder of a Bengali clothing worker, Altab Ali on 4 May in 1978, the Bengali community stood up against the evil of racism and people of all generations were involved including Abdus Salique. Dishari took part in many campaigns against racism and fought for workers rights through the trade union. In fact, one of his most famous songs was ‘Trade Union’. Dishari also acted as a platform for new upcoming talents. Many of them are famous now. Salique bhai also got involved with the Kobi Nazrul Centre, at 30 Hanbury Street, founded in 1982 and opened by Lord Fenner Brockway as a centre for Bengali arts.

Salique bhai started as a left political activist in Bangladesh, became a pioneering cultural activist in the UK, followed by becoming a successful business entrepreneur and a community activist whenever he felt his community was under attack.

Not long ago he had released a CD/DVD album of Baul songs titled ‘Sylheti bhaisaab’. In terms of his legacy, his daughter Shapla is a singer and continues to perform. His son Uchchall at the time of this write up was running Mumbai Square, an Indian restaurant, a continuation from Salique bhai’s own business, famous Saliques restaurant and Bonoful Sweets.

His other son is Shochall was working at Barclays Bank at the time. He also leaves behind his wife Hasna Salique. Abdus Salique bhai was buried in Gardens of Peace in Chingford following his funeral at the Brick Lane Mosque on 17 October 2020.