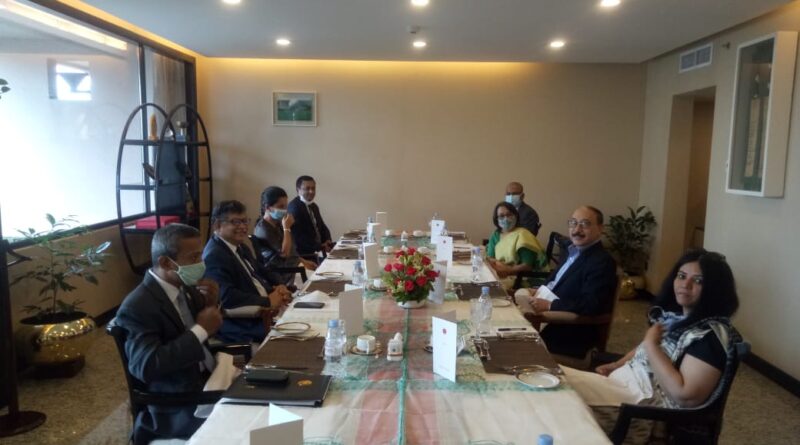 Both sides expressed satisfaction that even during this unusual situation created by the pandemic, the two countries have maintained a high level of engagement on the various areas of cooperation. Important developments have included conducting the first trial run for trans-shipment of Indian cargo through Bangladesh under the Agreement on the use of Chattogram and Mongla port as well as signing the second addendum to the PIWTT. Foreign Secretary Masud reiterated Bangladesh’s appreciation for the assistance of medicines and other medical items proactively provided by India for containing the pandemic. Handing over of 10 locomotives by Indian Railways to Bangladesh Railways was also appreciated.

Foreign Secretary Masud Bin Momen stated that Bangladesh is ready to collaborate in the development of COVID vaccine, including its trial, and looks forward to early affordable availability of the vaccine when it is ready. Foreign Secretary Shringla expressed India’s willingness to be in close contact with Bangladesh and other neighbours and highlighted the cost advantage that India enjoys due to its economies of scale in manufacturing.

Bangladesh side expressed appreciation to the Government of India for facilitating the evacuation of stranded Bangladeshi nationals from India to Bangladesh during the onset of the pandemic. In this context, Foreign Secretary Masud requested for urgent reopening of visa issuance from the Indian High Commission in Dhaka, particularly since many Bangladeshi patients need to visit India for availing critical and emergency medical treatment. Indian side was also requested to reopen travel through Benapole-Petrapole land port which has been halted by the West Bengal State Government in the wake of the pandemic. Foreign Secretary Masud appreciated India’s efforts to ease travel between both countries through introduction of ‘air bubble’ flights, proposed by the Indian side.

Bangladesh Foreign Secretary requested Foreign Secretary Shringla to expedite return of the Tablig members of Bangladesh who were impacted by the lockdown in India. Request was also made for early release of the 25 Bangladeshi fishermen who are in custody in Dhubri district of Assam. Indian side assured that the matter has been addressed and the Bangladeshi nationals would be able to return soon.

Both sides discussed firming up plans for organizing joint events to celebrate Mujib Borsho and the 50th anniversary of Bangladesh’s Independence as well as establishment of diplomatic relations between the two countries. They also expressed interest to hold programs at select capitals across the world, as well as at the UN Headquarters, through close coordination between the diplomatic missions of the two countries.

Both Foreign Secretaries also underscored the value of positive media reporting on the bilateral engagements between the two countries and agreed to call upon their respective media communities to play more responsible roles in this regard.

Bangladesh expressed deep concern at the rise in killings at the Indo-Bangladesh border by BSF/ Indian nationals during the first half of this year. Bangladesh flagged that this is in violation of all bilateral agreements and that the Indian Border Security Force must be duly urged to exercise maximum restraint. The Indian side assured that the BSF authorities have been sensitized of the matter and the issue will be discussed in detail at the DG level talks between BGB and BSF to be hosted by Dhaka next month.